Your local Galaxy Motors is a great place to shop for used cars in Victoria, but we are also local residents who love sports!

In fact, most of the hard working team at Galaxy Motors in Victoria grew up playing baseball, or rooting for someone on a baseball team. So we’re huge baseball fans and Victoria’s local baseball team, the HarbourCats, have 66 events on the 2019 season schedule that we want to help promote!

Did you see/hear about the amazing game between USA/Cuba in 2018 at the Royal Athletic Park in Victoria?

“The Cuba game in 2018 may have been the most entertaining match-up we’ve ever seen at our park — watching them play, their style and emotion, had people fully engaged in the game, smiling and enjoying the passion that is so evident in the Cuban way of playing baseball,” said Jim Swanson, Managing Partner/GM of the HarbourCats. “These are games that people will not want to miss.”

In fact, after the US matchup on Sunday, June 2nd, at 1pm, there will be a 6:35PM game between Cuba and Victoria HarbourCats!

Supporting the Victoria HarbourCats in 2019

Same as last year, we’ve donated a handy Dodge van that is perfectly suited to hauling around team gear, staff, and players! 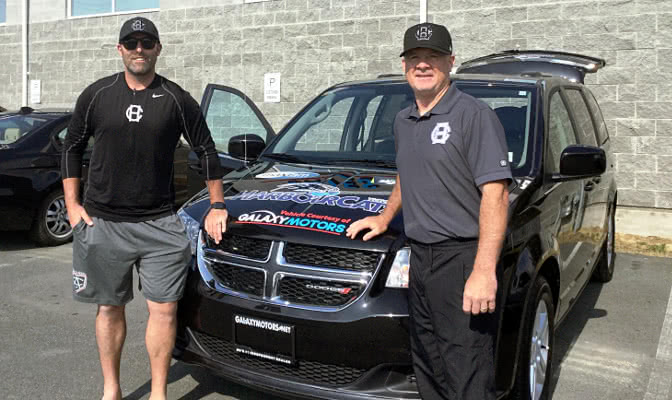 Above is a photo of the Victoria HarbourCats picking up the Dodge van which was sponsored by Galaxy Motors in 2019.

Galaxy Motors is giving away tickets to the Victoria HarbourCats baseball games for 2019 throughout the summer to our customers!

To get in on the free tickets just like the Galaxy Motors Facebook page and you could have the chance to WIN a family five pack of tickets to a game this summer!

We have lots of tickets to give away in 2019 so keep an eye on our Facebook page for one the many chances to WIN!

This summer, the Victoria HarbourCats will be four home games, each of which will be special Forces Fridays events. Forces Fridays are presented by Galaxy Motors as a salute to our military. Baseball fans can expect an unforgettable night of excitement and family fun during our Military Discount nights.

There will be a Galaxy Motors Crew at the Forces Fridays events, with fun games and prizes, so be sure to find them for more chances to win!

All active and veteran Canadian forces members will be able to purchase tickets* for the HarbourCats six Friday home games for a reduced rate of just $7.50 when you show your military ID.
(*Military discounted tickets need to be purchased in-person at Royal Athletic Park or at the HarbourCats office at 1814 Vancouver Street, as the offer cannot be applied to phone or online sales.)

All games start at 6:35PM, there will be Galaxy Motors giveaways at the door, in the fliers as tear-out coupons, and handouts to fans in the stands during the games.

Are you an active member of the Canadian armed forces? By showing a valid Canadian military ID you qualify for the Galaxy Motors staff discount of $750 off the price of a used car or truck!

Need more reasons to browse our great selection of used vehicles? Galaxy Motors works with to get great automotive financing rates as low as %! All of our used cars and trucks have CarProof vehicle history reports and a complete .

We REALLY love our local HarbourCats team and over the years we’ve supported them with vehicles and other items!

The used Dodge Van we donated for the 2018 Victoria Harbourcats Sponsorship was very handy and helped the team get gear and personnel to all the events in 2018. 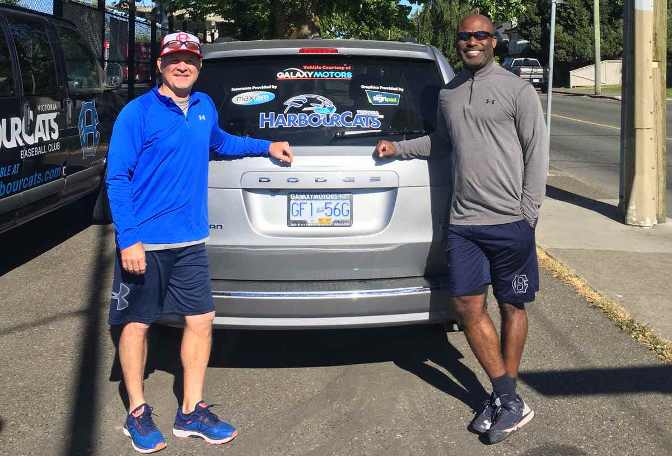 In the above photo you can see former MLB players (& HarbourCats coaches) Todd Haney, and Brian McRae leaning up against the Dodge van sponsored by Galaxy Motors.

Our 2017 Galaxy Motors sponsorship of the Victoria HarbourCats team was focused on helping our local team with promotions and ticket sales. It looks like someone forgot to take a photo of the sponsored vehicle, but we definitely were a sponsor!

For the 2016 year Galaxy Motors sponsored the local Victoria HarbourCats team with a very attractive Dodge Avenger to help the GM and managers get around the city. 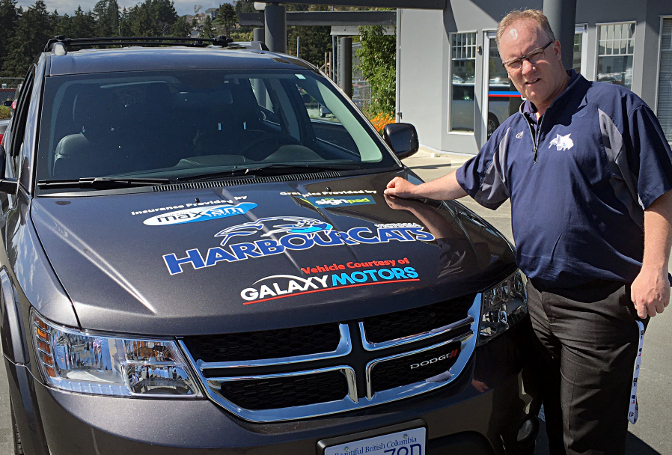 In 2015, the Victoria Galaxy Motors supported the HarbourCats’ driving needs for the year with a fully loaded Chrysler 200 S! 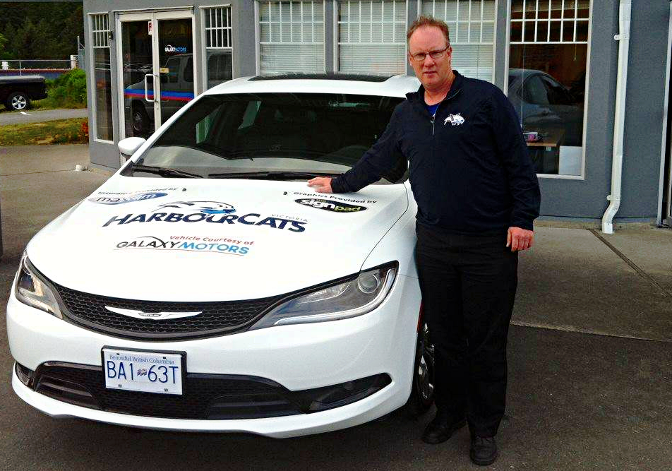 For the 2014 season Galaxy Motors supplied the HarbourCats with a fully loaded 2013 Chrysler 200 Limited that has bluetooth so the team GM/managers can drive safe while staying in touch. 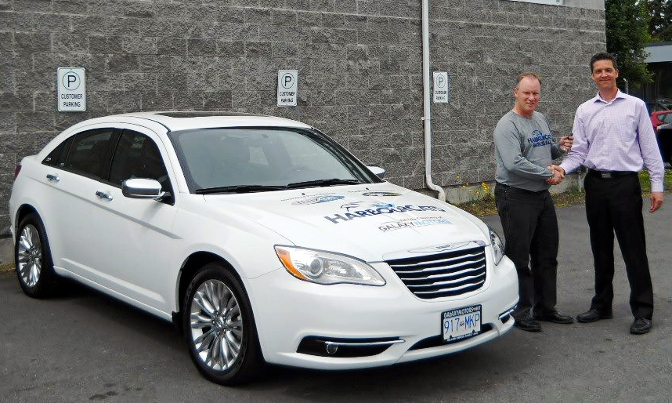 In 2013 Galaxy Motors teamed up with The Sign Pad Graphics to provide the team with a free used Dodge Avenger with insurance coverage provided by Maxxam Insurance & Realty! 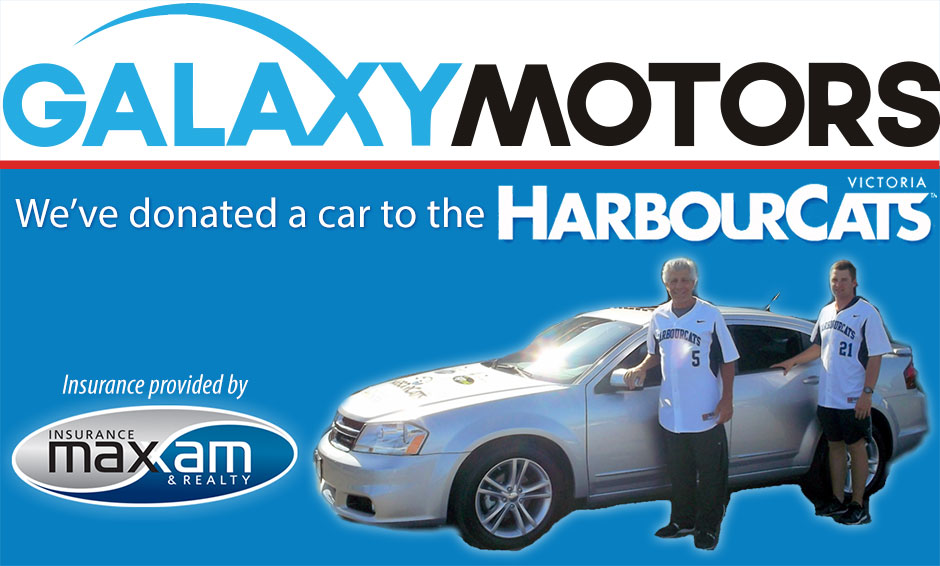